Interview mit Our Hollow, Our Home 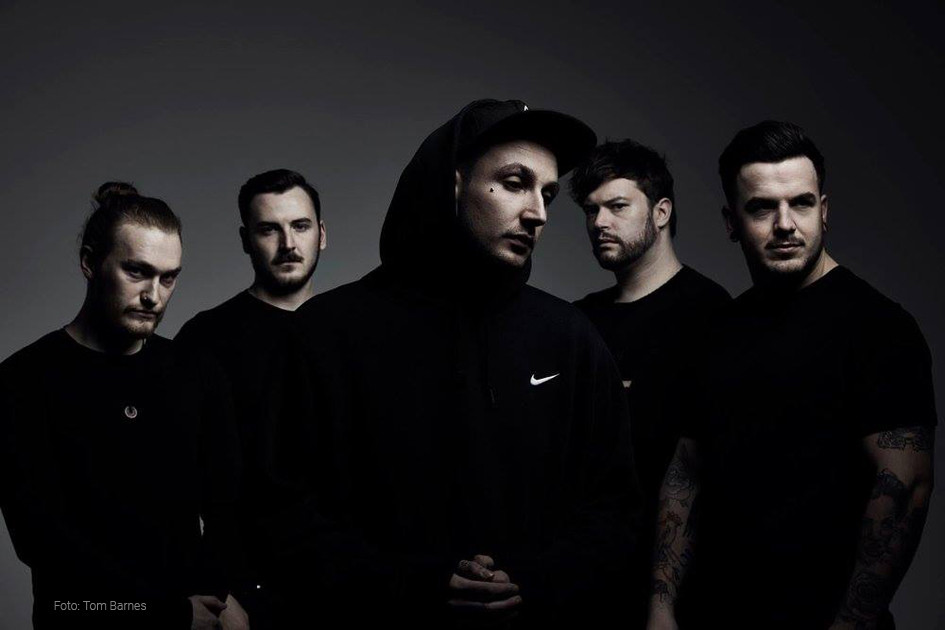 Lisa: How did you come together as OHOH?

Connor: We came together as a bunch of guys who’d worked together in other local and small time bands who wanted to develop a more defined sound and image in a new project we could truly put 100% into. The name came into being from the situation we felt we were in at the time, not being able to break out of our local scene, our ‚hollow‘ as it were, and we decided that no matter what, we would make the best of that situation when we formed. We were starting over and going harder than we ever had before, making that ‚hollow‘ situation ‚our home‘. I believe it was Toby who was the first person to suggest the name!

Lisa: Since forming the band in 2013, what were your major steps?

Connor: When we first started we were really just playing whatever shows we could get on, pushing our first two singles (Rest assured and Aversion) and writing towards our first release, the EP //Redefine. We released it in 2015, and after multiple tours in the UK and a couple of line up changes we started working on new material which eventually became our debut album ‚Hartsick‘. Since then we’ve been pushing the album as hard as we can and touring as much as possible! We’ve had some great opportunities since OHOH began, including playing with some of our favourite bands (The Amity Affliction, In Hearts Wake, Funeral for a Friend to name a few!) and developing the most supportive and incredible fan base over the years.

Lisa: You’ve said in an interview, that you don’t aim to break any boundaries and just play the music you want to hear – seems to be the perfect basis for your music career.

Connor: We are glad you think so too haha! We don’t claim to be anything we aren’t, we write and play the music we are passionate about, and if you like it as much as us then that makes you part of the family!

Lisa: In only four years of OHOH you’ve released a great debut album, played tours in Europe and you have more than 60.000 likes on Facebook. What do you think makes you different from other melodic metalcore bands such as All That Remains or In Flames?

Connor: We couldn’t be more happy with all that we have achieved in the short space of time we have been a band. I think much like those two bands you’ve mentioned, we don’t try and fit to any sort of mould and just do our own thing. We are passionate and spend a lot of time practicing and honing our craft, but most importantly we focus on what we are doing and those that support us, and don’t involve ourselves with much else!

Lisa: What are your influences as a band?

Connor: We take inspiration from so many different artists, across quite a few different genres. Some of us are super into Hip Hop, and some of us are into Classic Rock. Most of us grew up listening to bands like Thrice and Fightstar, as well as heavier bands such as Killswitch Engage, Bullet for my Valentine and Underoath, but again that’s only a really small number of bands that I think we would collectively site as being major influences to the band and helped shaped our writing!

Lisa: Your debut album is called ‚Hartsick‘. Who came up with the name?

Connor: Toby originally came up with the name ‚Hartsick‘, and both him and myself (Connor) worked together with the general concept of the album and artwork.

Lisa: The common theme of ‚Hartsick‘ is nature/animals. You’re all animal lovers. How important is animal welfare/environmental protection to you?

Connor: Thanks for noticing this! We tried to link each track title to either nature and/ or wildlife, and this also links in with all of the artwork for the album. None of us are vegan or vegetarian, but we do care strongly for animals and all have numerous pets, my fiancé and I actually keep a lot of reptiles haha. I think we would all agree that caring for animals and the environment are both extremely important, we only have one planet and we have a duty to do what we can to preserve it for future generations.

Lisa: From May til July you’ve been on the ‚Hartsick‘ EU tour. Was this your first ‚bigger‘ tour?

Connor: We toured Europe back in 2016 with Imminence (SWE) which was one of the most memorable tours we have ever completed, but the shows on the ‚Hartsick‘ tour were some of the biggest we’ve ever played. We got to share the stage with bands like Obey the Brave and Deez Nuts, and met so many of our fans! It was our first time playing a lot of places and we were so humbled by the response we received, we can’t wait to return!

Lisa: Your van broke down – worst case scenario on tour. How did you handle it?

Connor: It was a literal nightmare! We ended up being stranded for four days in Wolfsberg, Austria at a Mercedes garage awaiting parts to repair our van. We can’t confirm what we did in this time, but we feel we handled the situation as best as we could and made good use of the spare time that was given to us haha!

Lisa: In Germany (e.g. in Erfurt) you supported Evergreen Terrace. Is there any band you’d like to share the stage with in future?

Connor: It was a pleasure to share the stage with such a big name in the industry, and to hang with them a little and chat to them was really cool! They’re all really nice guys. I think if we had to name a band we would love to perform live with, it would have to be A Day to Remember! They were such a big influence to us and have made such a big name for themselves, it would be such an honour to play alongside them!

Connor: Maybe he’d give us main support on a world tour? Who knows… our cover of Shape of You did get retweeted by Ed’s manager saying he thought it was ‚the best cover yet‘, so maybe it’s a possibility, haha.

Lisa: Will you come back to Germany in the foreseeable future (maybe to Leipzig and Nuremburg)?

Connor: We will back in Germany sooner than you think! We can’t announce anything yet, but we will endeavour to play all the towns and cities that we were unfortunately unable to get to due to our transport issues as soon as we physically can!

Connor: We intend to spend as much of the year on tour as possible haha! We will be doing as much writing as possible also, so keep your eyes and ears peeled for all things OHOH coming in 2018.

//Redefine, Evergreen Terrace, Funeral for a Friend, Hartsick, Imminence, In Hearts Wake, Metalcore, Our Hollow Our Home, The Amity Affliction